Hello, my name is Calvin Szeto and I have been working with the Sac BHC Youth Media Team throughout this summer. I am grateful that I am part of such a wonderful team who supports each other and I plan on returning next summer. Through my summer project, I am going to put my skills to the test by doing a recap of this summer.

As I previously stated above, my summer project will be a recap from my perspective of my summer spent with the youth media team.  I have always been intrigued of professional photos and films. Going into this program, I was nervous of who I would meet and what I would encounter, but they helped me learn new skills and taught me how to use professional equipment. This summer has been memorable as my team and I have all bonded together through numerous activities and events, such as attending the Boys and Men of Color Summit, and Friday breaks. Furthermore, I would love to show everyone not only how my summer was, but how much I have learned and progressed throughout the year. 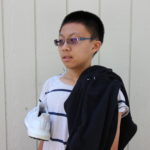 Not only I have taught myself, but my peers as well. My first day coming here, I had some personal experience with a DSLR and editing, but not a lot. I had a small test to see what myself and my other intern at the time, Jasmine, could do. Both of us had decent footage, but we both knew that both of us needed obvious improvement. Within that first week, we had went to the Girls on the Rise Conference. I had met two new interns, Breanna and Matthew. Editing the video I learned how Jasmine’s and my styles of editing were different. Our second event was the Block Party presented by the Crocker Art Museum. Alberto, Bobby, Jasmine, and I attended and filmed. The Block Party was live and vivid, and editing the video felt like a breeze as I had practice using Final Cut Pro. Through that event, we had seen one of my classmates Vanna. A week or so had passed by, and I heard that two new interns were coming, the following day, Caleb, Malika, and Weyman had came. I had already known Weyman and Malika, so it was a refreshing experience as I had not seen them in a while. Caleb was a new person that I had met, I initially did not like him, but the day after I grew to like him. We had training from RYSE in Richmond, and I learned how everyone’s style of editing was like. Then, we attended the Boys and Men of Color Summit. There were mistakes made by all of us on the crew, but we pulled through together as a team. Within that same week, Vanna had joined the team, and we made two others videos, Pokevote and the Full House intro. I decided to partake in one video, but both were recorded and edited by me. I am proud that I was able to produce both within a day. Breanna was finished with her part, so we made the Full House intro/HCC video for her. Pokevote was to get the message to vote but also be trendy as Pokemon go is a hit now. Finally, all of us on the team have our own personal projects, so stay tuned! I hope you will enjoy how summer sixteen was for me!

Thanks to all! The chances are high but possibilities are endless…