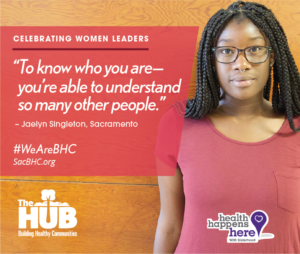 Which living person do you most admire?

Michelle Obama probably.  She’s just so elegant and just – it’s confidence without ego.  She stands by herself.  She is not just the first lady, she is Michelle Obama.

What is your idea of happiness?

What is your most treasured possession?

I don’t really have an attachment to a lot of stuff.  But my grandma gave me this box of all of her little things that she wanted to make sure that I kept – she collects coins so all her old coins are in there.  All of her . . . really good pictures.

Jaelyn was born in South Los Angeles but as a preschooler she and her mother relocated to Sacramento, her mother’s city of birth.  In this period, she attended schools in both affluent and impoverished neighborhoods making her keenly aware of the effect place has on individual and community, especially on health and health equity.  More recently she had close friends injured and paralyzed by shootings and neighborhood violence.  These experiences, coupled with a family history of substance abuse and mental illness, have motivated her to effect change within her community and to engage with Building Healthy Communities (BHC) Sacramento.

Education has always been important to Jaelyn.  In Sacramento she experienced two different educational systems:  a predominately minority school and a predominately White school on the east side of the city.  She describes herself as, “too White for the Black kids and too Black for the White kids”, thus she never felt a sense of belonging among her peers or within her community.  When it came time to enroll in high school, Jaelyn actively sought out McClatchy High School for its rigorous Humanities and International Studies Program as well as the diversity of the neighborhood it is located in.

During high school Jaleyn became active in BHC activities and programs as well as other leadership efforts.  At age thirteen she started volunteering with BHC’s Girls on the Rise, a youth-driven organization for women of color aimed at developing leadership skills with a focus on health advocacy.  Later, she worked with the Sacramento Young Feminist Coalition (SYFC), a collective of high school students throughout Sacramento that met bi-weekly to organize events in an effort to support local organizations.  The SYFC also developed and facilitated annual conferences focusing on issues such as reproductive justice, self-love and self-care.  Jaelyn worked closely with the Youth Leadership Team, a collaborative youth-led program within BHC Sacramento and she attended The California Endowment’s Sisterhood Rising Leadership Retreat and Sisters and Brothers at the Capitol in 2014.  Even now, at age eighteen, she continues to work with Girls on the Rise where she was recently hired as a member of their permanent staff – her work focuses on mentorship and healthy food access.

In her first year of college at Sacramento State University, Jaelyn is pursuing a double major in Psychology and Ethnic Studies.  While she is keenly aware of the impact of her grounding in Sacramento, she sees herself seeking new places, new experiences and most importantly, new perspectives.  She is passionate about mentoring youth to cultivate their ability to “make their own decisions with no fear” so that they do not have to choose between “an education or being safe”.