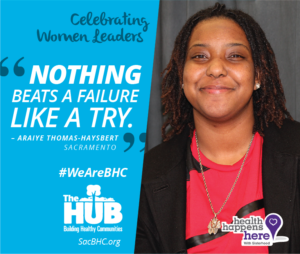 Which living person do you most admire?

Oprah.  She is just a powerful figure – she is a role model to me.

What is your idea of happiness?

What is your most treasured possession?

This locket my mom gave me.  She gave me and my little sister our own locket.  She just . . . kissed it and to me that sealed it . . . her presence is there always.

Araiye hesitates when asked where she is from.  She was born in Sacramento, but throughout her seventeen years she has moved almost too many times to count.  Together, Araiye, her siblings and her mother were homeless throughout her freshman and sophomore years in high school, causing her to attend six different schools in two years.  While experiencing a continuous process of transition, Araiye began to notice the extreme inequity that existed between the schools within affluent Sacramento communities, such as Elk Grove, and disenfranchised areas of South Sacramento.

Even while enduring homelessness, Araiye gravitated toward community engagement and, after being introduced to Youth Engagement Coordinator Alondra Young, she became involved with Building Healthy Communities (BHC) programs and activities.  Between her sophomore and junior year in high school, she began teaching summer art classes for children.  Beyond this, she devoted time to working as a leader within the BHC’s Youth Leadership Group.  With other youth leaders, Araiye helped organize a town hall with mayoral candidates, including current mayor Darrell Steinberg.  The town hall served as a platform for young men and women to engage with mayoral candidates, fostering a “youth voice” on issues that concern families and communities.

While working with BHC youth and programs, Araiye embraced her sexual orientation and gender identity.  Coming out as a lesbian was challenging for Araiye, particularly because her mother initially had difficulty accepting her identity.  Araiye stated – in no uncertain terms – that she was “really, really depressed coming out”.  But Araiye’s advocacy work has helped her mother accept her daughter’s sexual orientation and gender expression.  In fact, Araiye is most proud of the advocacy work she has conducted around gender justice issues.  She served as President of the Gay Straight Alliance in her high school, attended Sisterhood Rising Leadership Retreats for two consecutive years, and just recently participated in the Queer and Trans Youth Summit developed by The California Endowment.  She has also attended Sisters and Brothers at the Capitol, a conference designed to strengthen leadership and advocacy skills among young leaders of color.  With these experiences as part of her life, Araiye is interested in continuing to advocate for policy that affects LGBTQ youth.

Araiye is fearless even though she is keenly aware that she faces considerable discrimination as a self-proclaimed “triple” minority:  a Black, lesbian, woman.  At only seventeen years old she has already overcome hardships many adults never have to face.  She has not simply overcome adversity, but she has persevered.  Araiye will be attending Benedict College in South Carolina in the fall, making her the first in her family to attend college.  When asked about future goals, she candidly states she has not quite figured that out yet, but confidently says, “I’m here to make a difference, to do something, be a leader – not be a statistic”.